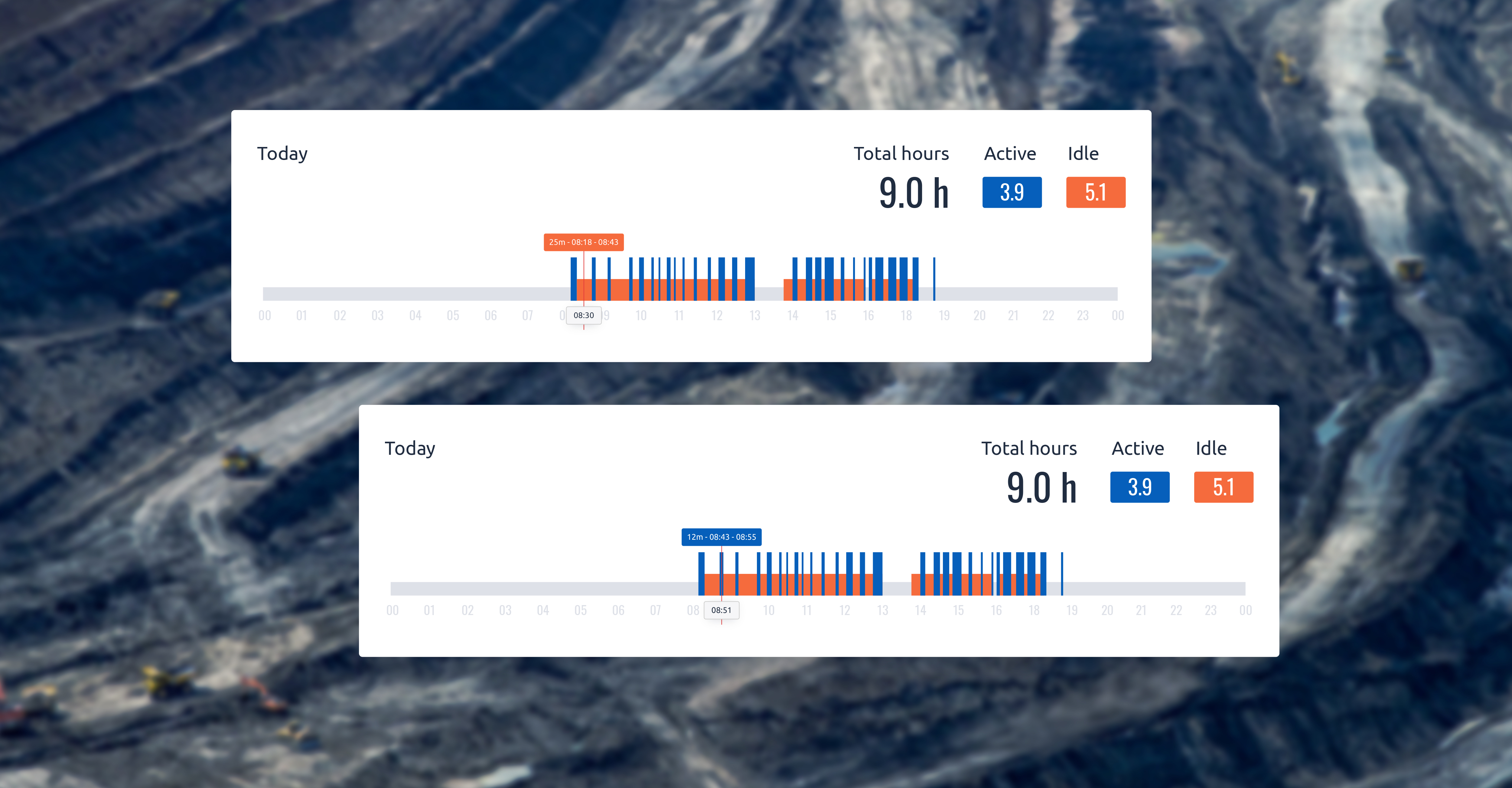 When it comes to mining equipment, idle times represent as much as 40% to 50% of total running time. So as open-cast mining equipment productivity decreases, finding alternative ways to increase equipment effectiveness is imperative. The ability to analyse equipment utilisation in real time is key to solving this predicament.

One of our clients — a United Kingdom-based open-cast mining company — was experiencing exceedingly high machine idle times. Additionally, there was no real way to delve into the problem without physically watching the assets. But thanks to MachineMax, the company was able to decrease its machine idle times and increase productivity.

With roughly 80 mixed-fleet assets spread across 6 square miles of land, accessing the right information proved difficult. Each original equipment manufacturer — or OEM — had its own onboard system, causing data silos and overwhelming outputs that were often displayed on less-than-intuitive dashboards.

The idling information that company leaders could access was summarised per shift. Thus, there was no real way to interrogate this data along a time continuum (which was necessary to identify potential issues or areas for improvement). Further, because of different onboard OEM systems, there was no way to cross-reference the data within equipment groupings — like loading and hauling — to determine whether idling was due to a bottleneck.

Thus, we offered a solution: applying telematic sensors, which have an independent power source and don’t require invasive installation. These sensors, applied directly to the machines, instantly started tracking the equipment’s utilisation.

The insights were immediate, and the display was so intuitive that the plant manager could easily identify the issue: The mine had several dump trucks queued up at the shovel, with an average wait time of 25 minutes and a haulage time of 12 minutes. This prompted further investigation. Our client ultimately reassigned two of these dump trucks — which not only decreased idle times, but also yielded a significant increase in productivity.

The impact of idle times is often linked to unnecessary fuel burn, which directly affects the bottom line and the environment. To add insult to injury, there are hidden costs attributed to unnecessary idling. Prolonged periods of idle time can also accelerate the rate of engine wear and the asset’s rate of depreciation as well as increase the need for preventive maintenance and oil changes — and this doesn’t even take into account productivity losses.

MachineMax sensors are engineered to produce data, but they also create understanding. In this case, it would’ve been much harder for our client to locate the root cause of extra idle times without the level of oversight our sensors provided. Our client relied on our IoT sensors to study the issue empirically (and directly) at the source.

Additionally, as the mine began collecting data from multiple loaders, it was able to gain valuable insights about controlling fuel costs, coordinating on-site equipment, and scheduling equipment operators. Thus, the sensors didn’t just maximise output, but also minimised input. The mine equipment began to operate as efficiently as possible.

Success in mining is ultimately about oversight and management. Fine-tuning every detail ensures the site lives up to its full potential, which means nothing is left to chance. Instead of relying on assumptions and estimations, rely on MachineMax sensors to reveal what’s really going on.